First apparatus was a 1922 Packard car built with a chemical firefighting system on the body.

Notable events in the early years:

Toms River Fire Co. No. 2 was on the initial response to Navy Base Lakehurst on May 6, 1937 to assist with the crash and fire of the air ship Hindenburg. Toms River Co. 2 firefighters were given a letter of commendation from base commander C.E Rosendahl.

Toms River Fire Co. No. 2 responded to the Ocean County Jail fire on Sunday morning August 23, 1959. 8 inmates perished, 4 Toms River firefighters were badly injured along with one civilian. On December 11, 2001 these firefighters were awarded with medals of honor from the fire department.

On August 23, 1959 at approximately 11:15 AM jail guard Stanley Moore discovered a fire in a cell block at the Ocean County Jail. Mr. Moore raised the alarm and Firefighters from Toms River Fire Companies 1 & 2 responded. A civilian who lived across the street saw the fire and also ran to assist. Firefighters Al DeCarlo, Roger Barney, Nick Bouziotis and Jim Smith along with the civilian Gerard Lau entered the jail to try to save the trapped inmates whose screams they could hear from outside. These brave men equipped with little or no equipment by today's standard groped through the blackness and extreme heat. Based on eyewitness and written accounts the men were caught in a flashover or some type of smoke explosion. These firefighters were barely able to escape and suffered significant injuries. Eight of the inmates who they were trying to save, however, perished. Unbeknownst to many of us, Dick Beck of Toms River Fire Company No. 1 had petitioned the Board of Fire Commissioners District No. 1 and the Fire Department Awards Committee on behalf of these men and their heroic deeds so many years ago. It was with great humility that the Board of Fire Commissioners District No. 1 and the Fire Department Awards Committee on December 11th 2001 bestowed the Medal of Honor to Firefighters: Al DeCarlo TRFC #2 Roger Barney TRFC #2 Nick Bouziotis TRFC #1 Jim Smith TRFC #1 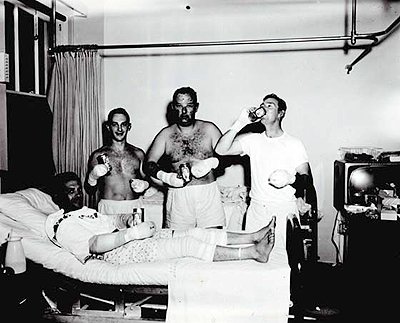